Singer Joss Stone is supporting a campaign to find three valuable bulldog puppies which were stolen in a raid at her breeder friend's Hemyock home.  Dog-nappers stole the puppies, which were worth several thousand pounds, after breaking into owner Jackie van Meeuwen's home while she was asleep upstairs. Family friend and soul singer Joss, who grew up in nearby Ashill, and who has a Rottweiler bred by Mrs van Meeuwen, is backing her appeal for anyone with information about the eight-week-old, hand-reared pups to come forward.  So far the dogs have not been found.

Joss is working in New York at the moment, but her mother Wendy said the Grammy award-winning singer had been shocked and saddened to hear of the theft of the puppies.  Joss bought her Rottweiler, Missy Elliott, from the same breeder.

Wendy said: "She was very upset when she heard that the puppies had been stolen and she completely backs the campaign to find them.

"She cannot believe that anybody could be so unfeeling.  It's bad enough to steal anything, but to take puppies that are loved and looked after is terrible.  We always hope that they will be returned. If people can keep their eyes and ears open and be pro-active about calling the police if they see them, we've got a chance."

A substantial reward has been put up by the owner for information that will help the police to find the dogs.  The bulldog bitch pups, which have no tails, are worth £2,000 each.

Raiders forced a latch on Mrs van Meeuwen's conservatory and took the pups, which were the smallest of a litter of nine, in the early hours of Sunday, January 6. The rest of the litter have already been sold.  One dog was dark brindle with a white face, and the other two were fawn with white faces.

Mrs van Meeuwen runs a free range egg farm and has bred dogs for around 20 years. She believes that the thieves knew what they were looking for because none of her other dogs were taken.

She says she hopes Joss's backing will help in finding the pups. She said: "We have put up posters and registered on www.doglost.co.uk, and the police have followed up a few suspected sightings, but they have not been found." 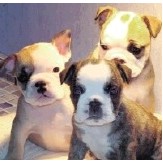