Phil Maclean is living up to his name by spring cleaning his home village of Hemyock on Sunday week.

Phil, 31, and a team of friends are offering to spruce up people's homes to raise money for charity in memory of his late wife, Lynsey.

He is also training hard running around local lanes preparing for the London Marathon, on Sunday, March 16 and recently completed the Bath Half Marathon.

He hopes to raise £1,750 for the Make-A-Wish Foundation UK, which helps dreams come true for children and young people fighting life-threatening illnesses.

Phil set up the Lynsey Trust after his wife died giving birth to the couple's daughter, Poppy, in October 2006.

It raises money for different charities each year.

Phil said: "I'm running the London Marathon in memory of my beautiful wife and know it would have made her happy that the money raised will go towards giving more magical wishes to children with life-threatening illnesses.

"It's hard finding the time to train with a 17-month-old daughter, but I hope to knuckle down over these next few weeks and make it across the finish line on the day."

Anyone wishing to sponsor Phil in the Flora London Marathon can do so by clicking here. 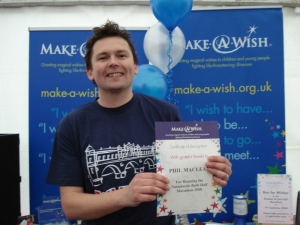 Phil after completing the Bath Half Marathon