In a time when many problems are affecting us, both nationally and globally, I thought it would be nice to write about something more cheerful. I live in a beautiful valley a few miles from Hemyock and I was there on the evening of the flash floods trying to play some tennis - the clouds were looking ominously dark and threatening in the Dunkeswell direction but Hemyock appeared to be much brighter, so I thought I'd take a chance. We had only been knocking up for about 10 minutes when the heavens opened so we rushed for shelter in the pavilion and within 15 minutes it was seeping in under the door. Having phoned a committee member and done what we could to limit any damage we thought we'd better head back to our respective homes but when I reached the Catherine Wheel it was obvious that I wasn't going to get any further and so I decided to drop in and ask the locals whether any roads were still passable. On being told that I didn't have a chance of getting out I decided that I had better wait there for a while and I ordered a half pint of ginger beer shandy to help while away the time and relax - I'm not used to propping up a bar on my own! To my horror, just as the young barman had poured it for me, I discovered that my purse was missing from my handbag - I'd been to Bridport and Honiton earlier that day and was very worried as to what might have happened to it. I felt such a fool being unable to pay for the drink I had ordered and at that point a very kind man standing next to me said not to worry and that he would foot the bill. Trying hard to conceal my embarrassment and discomfort I accepted his offer very gratefully. The deluge continued for the next hour or so with people coming and going and there was plenty to chat about. I thought my husband might be worrying about where I was a mobile phone was produced by another kind local and so I was able to reassure him that I was fine - just stranded. I was asked if I knew people in the village in case I couldn't get home that night and I said no, not well enough to just turn up and ask for a bed. The next kindness I received and one which truly touched me was the offer of one. I was beginning to relax and enjoy the experience and even to look upon it with amusement.

At about 8.15pm we noticed one or two cars driving past the window and so I thought that if I was going to try and get home that night I should really make a move before it began to get dark. At this point a lovely young man suggested that he should spray my engine with WD40 to give it every chance of not cutting out on me and I was also given several useful tips on how to drive through the floods. As I was about to leave someone else piped up, asked my name and asked me to ring the pub when I got home so that they wouldn't have to worry about me any more. As I got into the car I noticed my purse lying on the floor - a huge relief - and I popped back again to tell everyone and also to pay for my drink, but I was told that it would be an insult. I was sent on my way feeling that Hemyock is indeed full of kind and caring people and how fortunate I am to live in this beautiful part of England. To my great relief I was able to ring them 15 minutes later from the safety of my home. 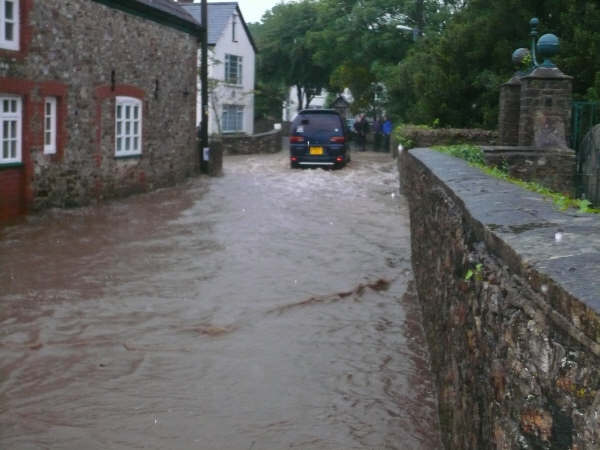