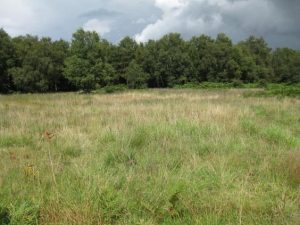 Commons are a legacy of the manorial system, division of the country into territorial or economic units, which has been in existence since Saxon times.  Manors were overseen by a Lord who farmed land himself using labour from slaves.  Other land was farmed by tenants, who may have had to help on the Lord’s farm, or used as common pasture or waste.  In Hemyock there were several manors at the time of the Domesday Book: Hemyock, Culm Davy, Culm Pyne, Mackham and Gorwell.

By the 1700s much of Hemyock parish’s 5,800 acres was enclosed fields, with approximately 1,500 acres of common, rough moor ground and hill tops.  The commoners had rights to pasture cattle, dig turves for fuel, collect and cut wood for repair and fuel.

The Blackdown Hills around Hemyock are made up of upper greensand rocks, topped by a layer of clay with flints and chert; water flows through this to a layer of impermeable rocks and where these meet the greensand there is a series of spring lines.  Thus the only water on the hill tops is from rainwater ponds, so they are unsuited to permanent grazing.

In 1709, seventeen farmers with common rights on Culm Davy Hill made an agreement, ratified by an Act of Parliament, to enclose the top of the hill “for the better improvement of the said waste grounds or commons” and to “divide and make a partition of the same amongst themselves”.   A document detailing the agreement is in Somerset Heritage Centre and two copies of the detailed division of the land, with maps, are in Devon Heritage Centre.

In 1814, prompted by higher prices during the Napoleonic War, a further Enclosure Act commenced for 1,200 acres on Hackpen Hill, Pen Cross towards the Monument, Coombe Hill – Symonsburrow – Hill Farm, along Burrow Hill and in the south west of the parish.  The end of the war in 1815 and subsequent fall in prices meant that the award was not fully implemented until 1836.  This document is also in Devon Heritage Centre.  1,200 acres were in the award, of which 350 acres were sold to cover the costs.  Other areas were sold to local farmers and 80 acres retained by Mrs Simcoe, who was the Lord of the Manor.

After enclosure five commons remained totalling 67 acres, two on the hilltop: Hemyock and Shuttleton and three along the boggy hillside: Ashculme, Lickham and Owleycombe.  Existing commoners and the poor retained the right to cut turves on the commons for their own use, which they did until about 1900.

In March 2013 the council established the Commons Management Group (CMG) with the aim of mitigating as far as possible the effects of all users of the commons.

The group regularly meets and liaises with various organisations such as Devon Wildlife Trust, Devon Biodiversity Records Centre, Mid Devon District Council to receive advice and guidance on the management of the commons. 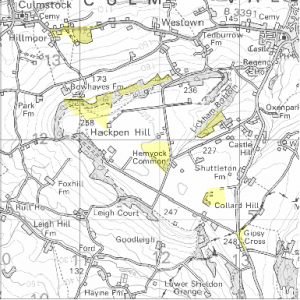 This common is around 20 acres and has been used by The Culm Vale Gun Club for over 40 years. Clay Pigeon Shoot times March & April 2022 and May - September 2022

The CMG hope to install benches around the route to complement the existing benches that are already on the site.

The land is very wet and not easily accessible.  The CMG has asked the Blackdown Hills Natural Futures team to visit the site and report back on what they find.  It is anticipated that the visit will take place during the drier months of 2016.  Watch this space. 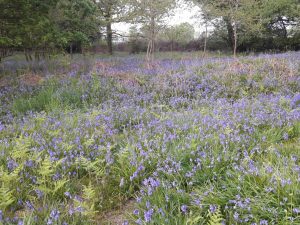 This common is around 11 acres and is a wildlife haven.  The CMG has worked closely with Devon Wildlife Trust and has had several successful volunteering days at the site.  At the volunteering days scrub clearance has taken place, silver birch has been coppiced, and several areas have been burned.  At Shuttleton a series of firebreaks have been created (by using a mulching topper) to allow a controlled burn of a particular area each year.  An area of purple moor grass has been cut to reduce the vigour of growth. 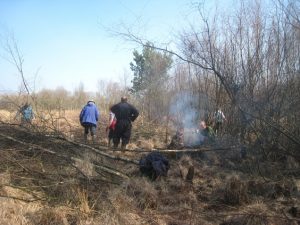